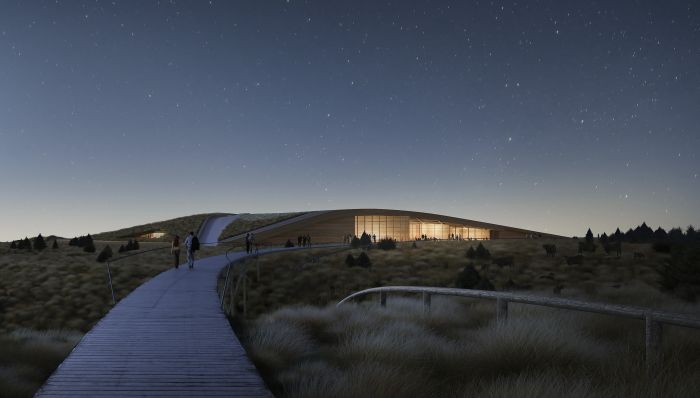 Render by Moare, courtesy of Snøhetta

Snøhetta is the internationally known architectural group that began as a collaborative architectural and landscape workshop, and has remained true to its trans-disciplinary way of thinking since its inception. For 30 years, Snøhetta has designed some of the world’s most notable public and cultural projects, including the new library of Alexandria, Egypt, the Norwegian National Opera in Oslo, the National September 11 Memorial Museum Pavilion at the World Trade Center in New York City, and the San Francisco Museum of Modern Art Expansion in California.

And soon, there will be a Snøhetta design in the Badlands of North Dakota.

Snøhetta has been selected winner of the Theodore Roosevelt Presidential Library Competition, that will be built in Medora, North Dakota. This is a town in western North Dakota where the Theodore Roosevelt National Park is also. It is an area where the Great Plains meet the Badlands, where bison, elk, and prairie dogs live near the Little Missouri river, and where President Roosevelt once lived before he became the 26th President of the United States.

Shortlisted from an original pool of 40 applicants, the Snøhetta team traveled to Medora over the summer to survey the site and to meet with the local community, stakeholders, and residents. As the selected design architect, Snøhetta will work with a local, North Dakota-based architect to deliver the final project.

Snøhetta’s design for the Theodore Roosevelt Presidential Library is informed by the President’s personal reflections on the landscape, his commitment to environmental stewardship, and the balance of quiet introspection and active civic engagement that marked his life, both before and after his Presidency.  The Library design is a journey through a landscape of diverse habitats, punctuated with small pavilions providing space for gathering and for solitude. The Library’s  sloping roof points in a northeasterly direction, toward the National Park, the Little Missouri River Valley, and the Elkhorn Ranch, the location of Roosevelt’s principal home in the Badlands.

“When designing a new project, we think about how we can more give to the site or community — more than is initially asked of us,” said Craig Dykers, founding partner and architect at Snohetta,  “We integrated the Theodore Roosevelt Presidential Library into the landscape of the North Dakota Badlands. We have much to learn about President Roosevelt, and we’re looking forward to working with the Medora community and the broader project team to translate this new knowledge into an immersive place that reflects T.R.’s life and legacy.” 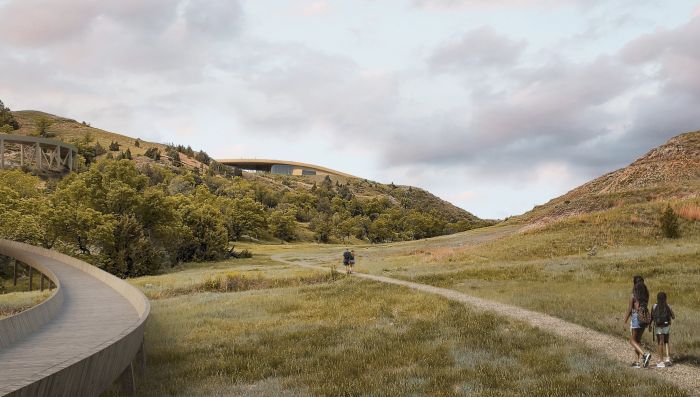 Render by Moare,courtsy of Snohetta

The building’s location at the northeast edge of the butte, preserves the landscape for conservation research while offering a setting for educational walks, leisure, and recreation. As visitors set out on the Library loop, they will encounter adventurous paths which connect to the nearby Maah Daah Hey Trail — as well as several small pavilions.

The architectural design functions in harmony with the unique ecology of the region and expresses the conservation ethos for which Roosevelt is remembered. Its construction will use locally sourced and renewable materials, while its energy systems will set a new standard for sustainable design in the region. The design also mitigates the impact of wind and other climatic factors so that the Library will be accessible in all seasons. 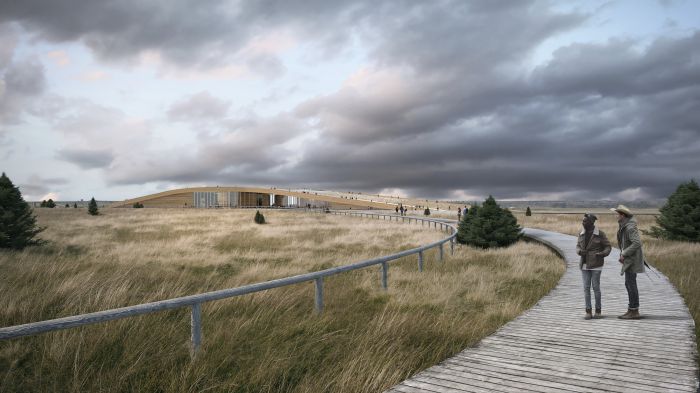 Render by Moare, Courtesy of Snohetta

Looking back at the Library 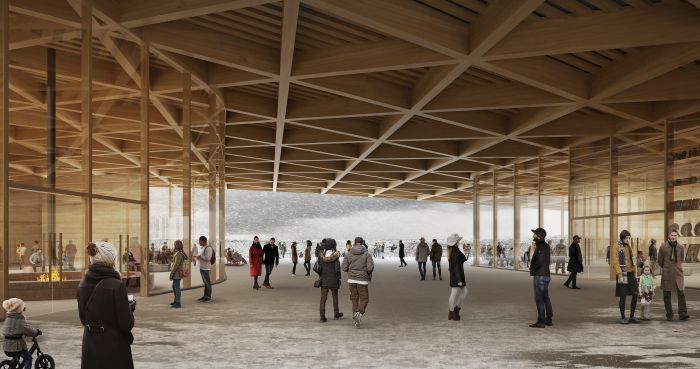 Render by Moare, Courtesy of Snohetta