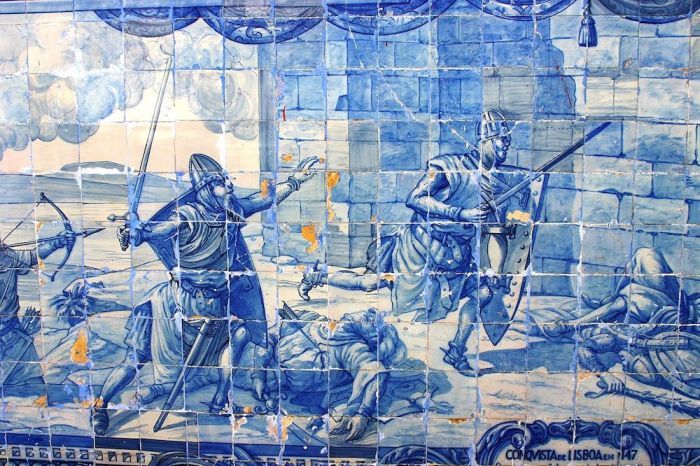 Maria Antonia Pinto de Matos, Director of the renowned Portuguese Tile Museum, the Museu Nacional do Azulejo, is an encyclopedia of tile and porcelain knowledge. When we went to this exceptional museum as part of the Viking River Cruise Douro trip, she explained tiles were originally, products of the Moorish culture that came from Africa in the 15th Century, when parts of the Iberian Peninsula, including Portugal, were still under Moorish rule.

Also, she commented, though it would easy to believe the word azulejo has something to do with the Portuguese and Spanish world azul, meaning blue, the word is actually Arabic in origin, from the word az-zulayj, which (roughly) translates as “polished stone.” And these ancient Moorish polished stones became works of art: small, blank canvases painted with intricate designs, but because of the Moors’ Islamic religious beliefs, no human images could be designed on the tiles. 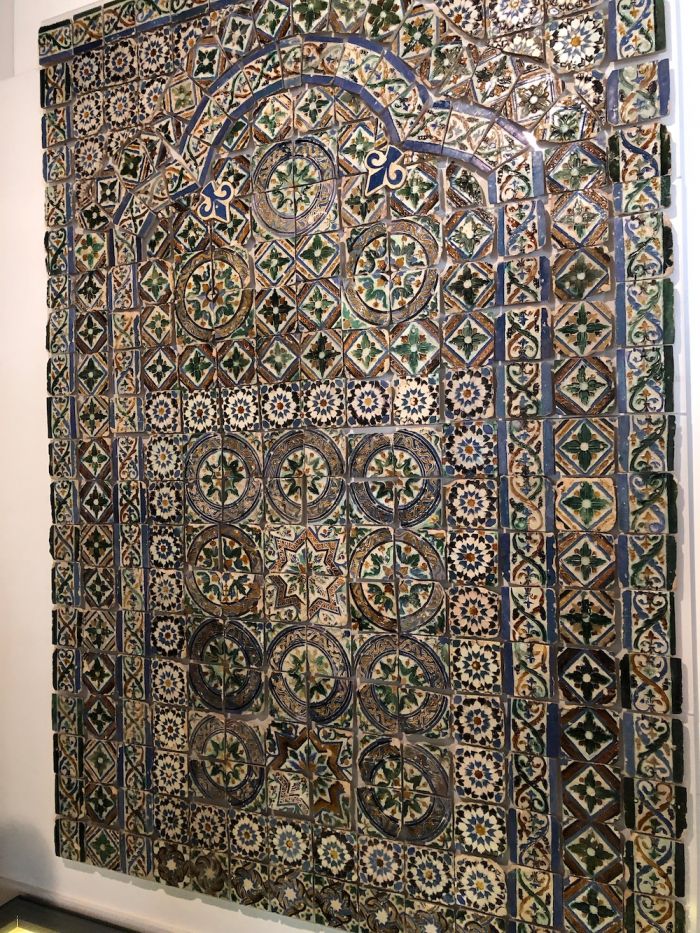 But, as usual, art evolves with culture in which it lives.  And, as tile designs moved from the intricate Islam/ Moorish designs to Iberian Catholic/biblical storytelling designs, the blue and white tiles of Portugal and Spain became the symbols of religious art, perhaps first in Portuguese cathedrals.  The tile museum we were exploring was a great example, as this museum was originally a convent and church, the Madre De Deus, built in 1509.  The tiles that decorate the interior of this convent complex define biblical stories and historic events in engrossing blue and white detail: Moses and the Burning Bush, St. John the Evangelist, the fall of Lisbon, the life of Santa Clara, the works of St Francis of Assisi, and many more. 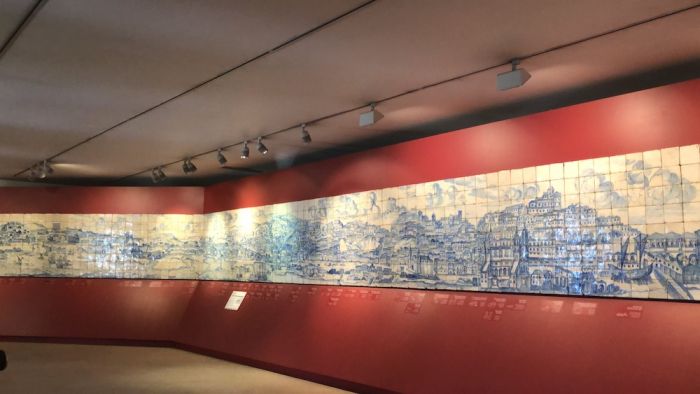 The Lisbon Panel, depicting life in Lisbon for the Earthquake.Â Credit:Susan Kime

Many of the tile pieces seen in this Museum are historic and one of a kind. The Lisbon View Panel is one. Created before the 1755 earthquake that decimated and essentially flattened Lisbon, it shows over 8 ½ miles of Lisbon’s coastline from Alges to Xabregas. Originally the panel encircled a room and was placed at knee height, so that those entering the view would have a bird’s eye view of Lisbon. But now, the tile panels are at eye level, and depict a thriving city. Our guide told us it was the only representation in existence of the city of Lisbon before the earthquake.

Another set of tiles is the Nossa Senhora da Vida (Our Lady of Life) panel from the late 16th century. The tiles were originally applied in the Church of Santo André in Lisbon which was partially destroyed in 1755. The panel is employs a wide range of tones, and is considered one of the richest to be found in Azulejo production of the time. It simulates a three-part altarpiece composition painted with 1,498 Azulejos, with the painting of the Adoration of the Shepherds in the center. 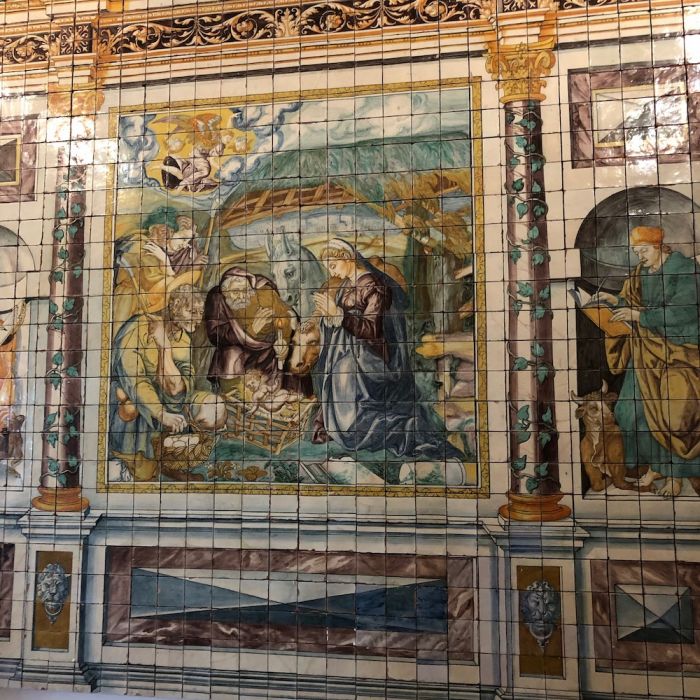 But again, time passes, art history evolves, and now, Azulejos are found not only in religious institutions but also in palaces, residential homes, restaurants, park seats, fountains, shops, and train stations.They often portray scenes from the history of the country, or simply serve as street signs, nameplates, or house numbers. Or even, full exterior walls of business offices. Some of the most famous sites known for Azulejo art include the Sao Bento Railway Station in Porto, and many stops on the Lisbon Metro. Other outstanding displays are found in the city’s São Vicente de Fora Monastery and Fronteira Palace, and in Lamego, the Nossa Senhora dos Remedios Church. 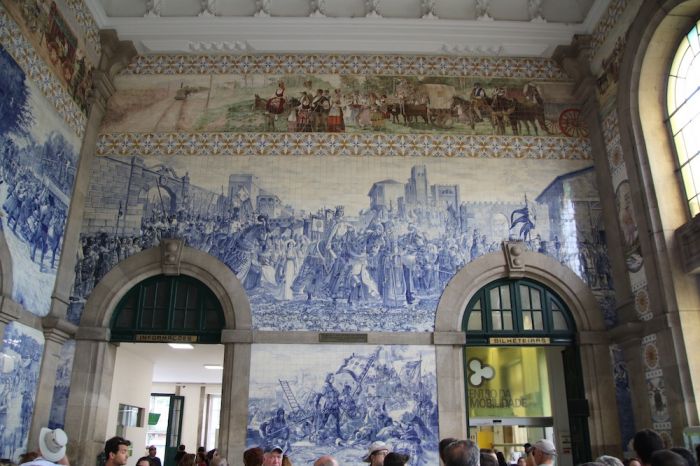 But cathedral tile work is found not only in major cities. We traveled to Tarouca, a small valley in the Alto Douro region in Portugal, to visit the ruins of the monastery of São João de Tarouca (St.John of Tarouca.) This was the first monastery of the Cistercian Order to be founded in the Portuguese territory in the 12th century. The monastery is now in ruins, but noted on a ruined were blue and white tiles. Near the monastery was a church, where St. John is buried in a granite tomb. The tilework inside the Parish church – not a cathedral – was exceptional.

Although not a Portuguese invention, the tile has been used imaginatively and consistently in Portugal, and by the 18th century, historic documents show that no other European country was producing as many tiles for such a variety of purposes and in so many different designs. Today, they remain an important art form, combining the country’s unique art history with its Iberian cultural identity. 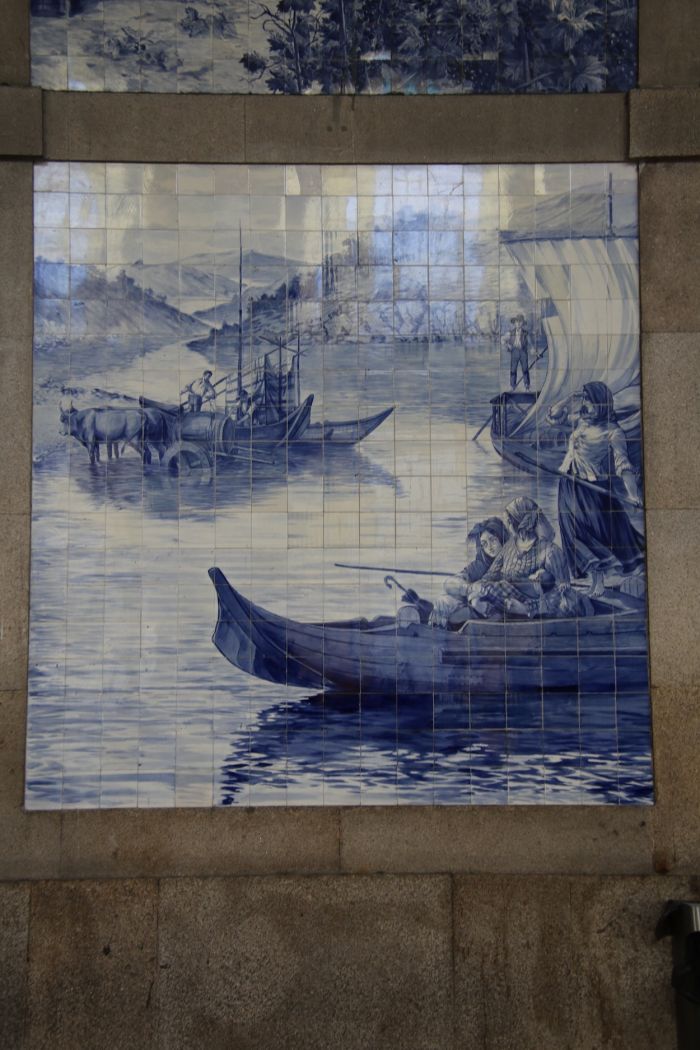 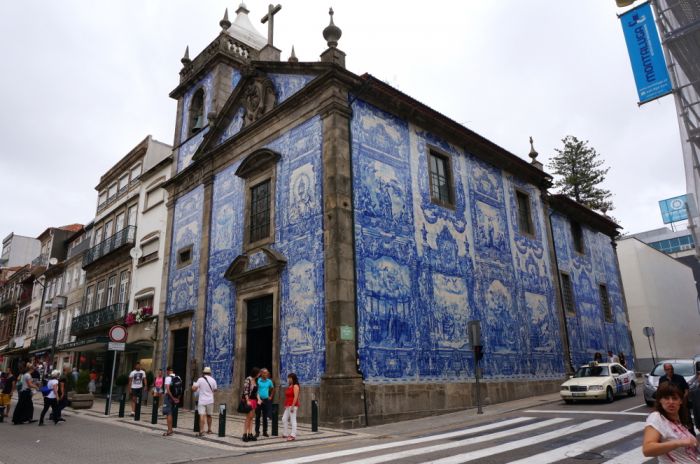 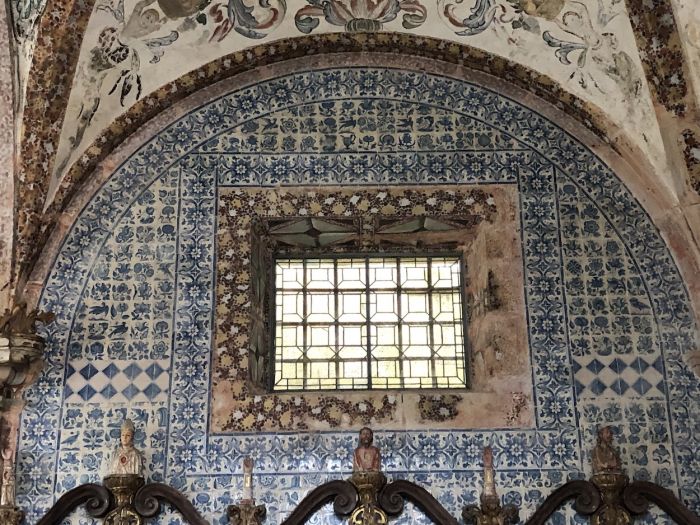 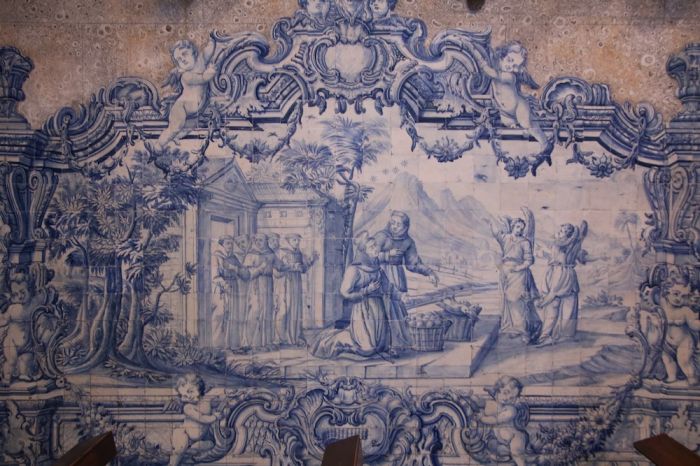